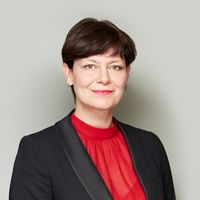 "Thruples" or "throuples" is the new word on the street. It describes three people who are in a loving and committed relationship with each other, which may or may not be exclusive to the thruple. The relationships are not limited to the heterosexual, bi-sexual or same-sex. It is something entirely different from what might otherwise be described as an "open relationship" which (if you are in want of a definition) is where a couple decides that either partner is free to sleep with other people if s/he/they so wishes.

As my mother used to say (somewhat wistfully I thought), "Anything seems to 'go' these days…"

But does it? The law, as ever, in this jurisdiction could be criticised for being slow to move with the times and the reality of how individuals conduct relationships.

In contrast, Sharia law (which allows a man to marry up to four wives) provides that each wife must be treated equally (in that there should be no discrimination or preferential treatment between the wives), there is no such equivalent in this country particularly when bigamy (the act of marrying more than one spouse) remains illegal.

If you are in a thruple, where two out of the three are in a married or civil partnership, you therefore need to proceed with extreme caution. If you are not a spouse or civil partner, you may have no rights or strictly limited rights in the event of a breakup and/or death of one of your partners and could be left financially destitute.

A married person (or a civil partner) in this jurisdiction has elevated rights in comparison to a cohabitee - regardless of whether the nature of the relationship is comparable or identical. A spouse/civil partner has the opportunity to make a raft of financial claims against his/her/their spouse/civil partner on the breakdown of the relationship, such as an application for maintenance/a pension share/transfer of property or lump sums, whereas a cohabitee has no such automatic rights. At best, a cohabitee might be able to make a claim for a share in the equity of their home, if s/he/they is/are able to evidence financial contribution to its value. Even cohabitees with children only have recourse to a claim under the Children Act 1989 which provides for a transfer/settlement of property to provide for a child during its minority.

Express agreements might overcome these difficulties but these would need to give the "third" person clear and enforceable rights in the event of a "trivorce" (a concept which legally does not yet exist of course!).

Like most things in life, communication not nomenclature perhaps needs to be the key. Many of my clients have found themselves in an "open marriage" without really consenting to the concept – in reality, someone has just decided to be unfaithful. Housework - does it prevent you from cleaning up in Court?
Emily Brand
Recent posts from Boodle Hatfield